Leading Kent DUI Attorney Says that Cops Can Get Arrests Wrong, Too

Bloodshot eyes, scattered thoughts, and a dry mouth are all reason to suspect someone for marijuana intoxication. Have you ever heard, however, of someone being pulled over for having a green tongue?

Weird as it sounds, this is precisely what happened to a Washington resident last year. Local station Q13 Fox reports on this odd case:

Pot may be legal in Washington state, but Kent police recently arrested a Puyallup man for driving under the influence because, he said, he had a green film on his tongue.

Mike Simmons, 31, said Tuesday he was put in jail for 13 hours. Now with towing and lawyer fees, he said he’s out $5,000 and he’s not allowed to drive while he’s out on bail.

All for something he said he didn’t do.

“As soon as the officer came to the vehicle, he asked me to stick out my tongue,” said Simmons.

Simmons thought it was an unusual request but he soon found out he was pulled over for suspicion of driving under the influence.

Simmons said the officer told him there was a green film on his tongue. The unidentified police officer apparently felt that is a telltale sign that someone has been smoking marijuana.

While Simmons does admit to having smoked marijuana three days prior, he claims that he was sober the day he was arrested. Furthermore, there were no indications that he was carrying pot in the car. 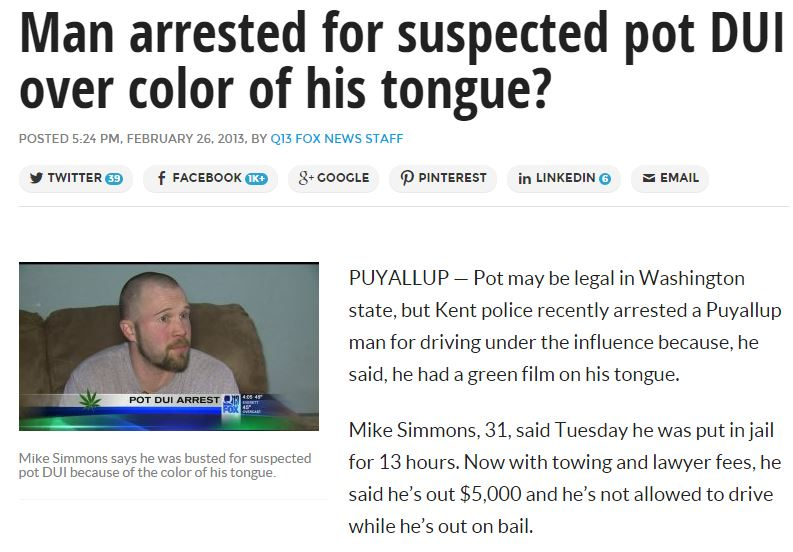 Not Infallible
As any notable Kent DUI attorney such as Kim Hunter would point out, this case proves that sometimes police officers can get DUI arrests all wrong. After all, many of the outward symptoms of being high are attributable to other factors. For instance, red eyes can be caused by eye strain or an infection. Fuzzy thoughts, on the other hand, might be the effect of fatigue and not necessarily intoxication.

An Expensive Mistake
As mentioned in the article, Simmons had to pay about $5000 to be released from jail—a fortune considering the iffy evidence the police had against him. If convicted for a wrongful DUI arrest, that figure will be even higher: first-time offenders must pay a fine of anywhere from $865.50 to $5,000.

A DUI conviction also comes with serious consequences. To begin with, those found guilty will have their license suspended for 90 days to one year. More importantly, they may also serve jail time for 24 hours to one year.

Don’t Take Chances
Those who find themselves in similar situations must contact an experienced Kent DUI lawyer who will defend their case. By carefully studying the arresting procedure and pieces of evidence available, an attorney can help dismiss cases like the one Simmons was charged with.