Recognizing the rising cases of fatal crashes caused by intoxicated drivers throughout Washington State, Gov. Jay Inslee responded by enacting harsher DUI penalties into law– considered the toughest in the nation. Further information can be found in this excerpt from Rachel La Corte’s article on KomoNews.com:

Joined by family members of victims, the governor signed a measure on Thursday toughening impaired driving laws after a spate of fatal crashes.

“No law can bring these loved ones back,” said Inslee, who was also joined by lawmakers and law enforcement officials. “But we must move forward in preventing even more loss of life on our roads.”

If you ever happen to drive intoxicated throughout Washington State (which we hope not at all), here’s why you’ll need to have a skilled DUI attorney in Federal Way and other locales within reach to successfully work your way out. 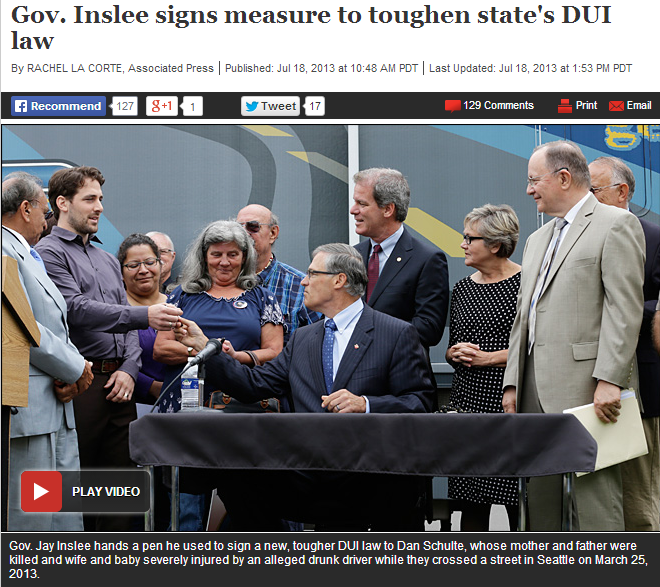 Washington State’s DUI laws are considered the “toughest in the nation” for good reason. If you get caught, you’ll have to serve a minimum of day-long to a maximum of year-long jail sentence, and pay corresponding fines with a minimum of $865.50 and a maximum of $5,000. Driver’s license will be suspended for a minimum of 90 days to a maximum of 4 years. Minimum jail time increases if there are prior offenses, if the BAC (blood alcohol content) is .15 or higher, or if the sobriety test was refused. You’ll also have to suffer the humiliation of having an ignition interlock device installed on any vehicle you drive for one year.

In the event that you get caught, you still have alternative options to lower your DUI charges. People charged with DUI opt to enter a deferred prosecution program, which can be handled with assistance from an experienced Federal Way DUI lawyer like Kim E. Hunter. To qualify, the defendant must be officially diagnosed as either alcohol or drug-dependent, or in need of psychiatric treatment. A deferred prosecution can put a DUI charge on hold for up to five years, depending on certain circumstances. If the defendant successfully completes a two-year rehabilitation program, stays sober, and maintains law-abiding behavior, then the charges will be dropped.

Washington State’s DUI laws are no joke. Getting entangled with the law is very tough, but asking for professional help immediately can definitely make it easier for you and all affected parties.