In Washington State, when people hear of DUI, drunk driving is probably the first thing that comes to mind. However, since the state legalized marijuana in 2013, more and more drivers are getting arrested for marijuana DUI. According to a news article in The Christian Science Monitor, 745 drivers have tested positive for having pot in their system in the first half of 2013. Below is an excerpt from the report:

“Significantly more drivers pulled over by police in Washington State are testing positive for marijuana since legalization of the drug’s recreational use took effect in January, according to figures released this week by the Washington State Patrol.

In the first six months with pot legal in the state, 745 drivers stopped by police tested positive for the drug’s psychoactive ingredient, THC, in their blood, the data show.

Over half of those were over the state’s new legal limit of 5 nanograms of THC per milliliter of blood.

By contrast, in each of the last two full years, about 1,000 drivers who were pulled over tested positive for THC.

The increase comes despite the fact that recreational-use pot stores will not open in Washington State until next year.”

You may think it’s illegal to smoke weed then drive, but it’s not. Just like alcohol, driving after using marijuana is not illegal as long as the driver is not over the legal limit of 5 nanograms of tetrahydrocannabinol (THC) per milliliter of blood. Still, that doesn’t prevent Washington police from arresting drivers because of ‘probable cause’ such as nystagmus (involuntary eye movement), eyelid tremors, dilated pupils, or other spurious evidence. 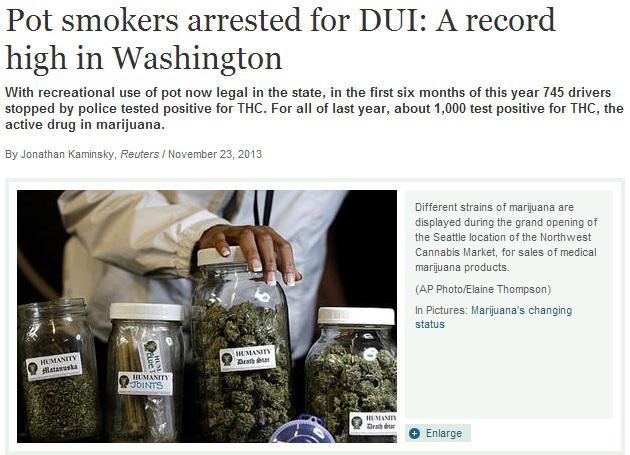 Oftentimes, a DUI charge is based on a police officer’s personal opinion. Blood tests confirm that THC is in a driver’s bloodstream but means not much else. An officer may make you take roadside tests to prove marijuana impairment, but these tests can be flawed in terms of application and interpretation of results.

DUI is a serious charge that comes with heavy penalties. It could cost you your driver’s license, considerable amounts of money, and possibly rob you of your freedom. Such serious charges require serious defense from a knowledgeable Kent DUI attorney.

If you have been charged with marijuana DUI, contact a trusted Kent DUI lawyer like Kim E. Hunter for a free initial consultation.