While fans rejoiced upon the legalization of marijuana’s recreational use in Colorado and Washington, the authorities were on its toes, anticipating a rise in DUI cases on highways and main thoroughfares. Joan Lowy of the Associated Press reports on The Christian Science Monitor:

“We see the legalization of marijuana in Colorado and Washington as a wake-up call for all of us in highway safety,” said Jonathan Adkins, executive director of Governors Highway Safety Association, which represents state highway safety offices.

“We don’t know enough about the scope of marijuana-impaired driving to call it a big or small problem. But anytime a driver has their ability impaired, it is a problem.”

Colorado and Washington are the only states that allow retail sales of marijuana for recreational use. Efforts to legalize recreational marijuana are underway in Alaska, Massachusetts, New York, Oregon and the District of Columbia. Twenty-three states and the nation’s capital permit marijuana use for medical purposes.

It is illegal in all states to drive while impaired by marijuana. 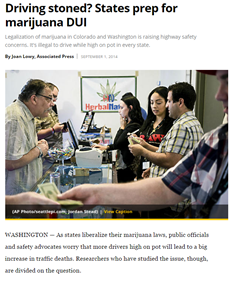 Washington is deemed to have the toughest DUI laws in the nation. No thanks to the lowered legal limit of .08% for alcohol, it is so much easier for people to be apprehended. The penalties attached to it can also potentially be life-altering, such as the suspension of license (regardless of non-conviction), mandatory jail that will reflect on permanent record, stiff probation violation penalties, mandatory court appearances, and more.

When it comes to marijuana use, the state police have long been preparing for this increase in DUI cases. In fact, in the first eight months alone of the legalization, authorities have already seen 37 DUI marijuana-related DUI arrests. The problem, so it appears, is that people wrongly assume that just because using marijuana is now legal, they can do that and drive at the same time. This isn’t the case, though, as also clearly exemplified by the relationship of alcohol with driving: you can drink, but you can’t drive when you do.

Depending on the circumstances, officers can ask a suspected DUI offender to perform a field sobriety test to determine if there is any kind of impairment present. A blood test or urine test may also be requested, but as any DUI defense lawyer in Federal Way, or in surrounding areas—such as from the Law Offices of Kim E. Hunter—would advise, a judge must first sign a search before such tests can be granted.

With numbers of DUI cases expected to continue to rise on account of marijuana use, a DUI attorney in Federal Way, or in other nearby areas in the state, would surely come in handy at some point for recreational, or even medical, users.